Atherton is one of the most sought-after of addresses in Silicon Valley and has been placed at #1 on the annual list of America's most expensive zip codes to live in 2017 by Forbes magazine.

With its tree-lined streets, opulent homes, spectacular gardens, and notable residents, Atherton is considered to be among the wealthiest communities in the United States and is the home to many chief executive officers, venture capitalists, and founders of Silicon Valley's high-tech companies including Apple Computer, Google, Hewlett Packard and Facebook, just to name a few.

Atherton is also in close proximity to the renowned and prestigious Stanford University, as well as being conveniently located between two international airports and several executive airports around the Bay Area.

Of considerable mention for weekend and vacation travel not far of range from Atherton is Napa Valley, Pebble Beach and Lake Tahoe. For close and intimate events and holiday adventure, San Francisco, San Jose and Half Moon Bay. And, within the town, The Menlo Circus Club, a private club, with tennis swimming, stables and a riding facility. 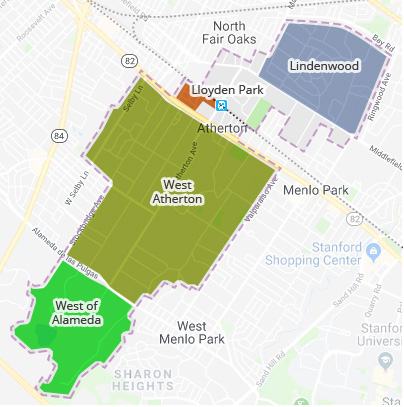